A weekend in Berlin

Last weekend I spent a few days in the German capital Berlin.

It was the first time I'd been to Berlin since spending a day there in 1995. At the time I was inter-railing across Europe. I wasn't there long enough to get a real feel for the city. My lasting memory was the feeling of amazement that only 6 years after the fall of the Berlin Wall I was actually in the city itself standing in front of the Brandenburg Gate!

I remembered looking over towards East Berlin and seeing what looked like a massive building site. I always thought it would be great to come back again one day once all the rebuilding had finished. 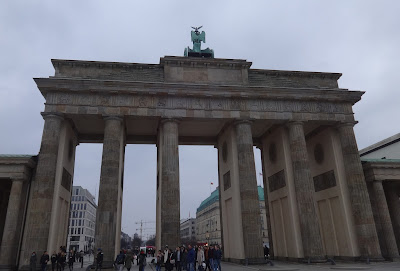 Berlin has a reputation of being a kind of cool hipster capital of Europe, similar to London's Shoreditch and Hoxton. I have to admit it does have that vibe about it. I was surprised at just how chilled and laid back Berlin was for a capital city.

Cities like London, Paris and New York have that feel of places that say to you: 'this is where it's at' They are cities that have the confidence to say we are the biggest and the best. Certainly with London, Paris and even Rome, you also have that European grandeur.

Even though Berlin is an historic capital I get the feeling that it doesn't have those kind of pretensions, it feels like a city that doesn't take itself too seriously which is something I quite liked.

What Berlin does have is a heavy sense of 20th century history hanging over it. No city in the world represented the division between the Capitalist West and Communist East than the Berlin Wall. I remember when the Wall came down in 1989 and realising that I was watching a truly historical event.

Other historical sites include the government parliament the Reichstag which was famously burnt down by the Nazis in 1933, Checkpoint Charlie and The Topography of Terror, both an in and outdoor museum on the site of the ruins of the old Gestapo and SS headquarters. 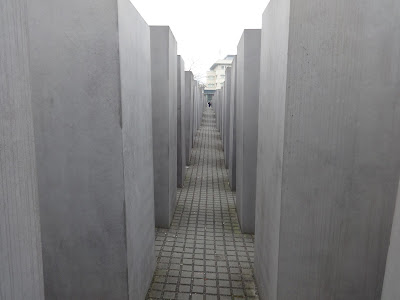 Memorial to the Murdered Jews of Europe.

I wasn't aware of the memorial until my friend pointed it out to me. It was designed by the architect Peter Eisenman and inaugurated in 2005. The memorial is made up of hundreds a grey blocks which have been formed into a grid system which once inside feels like you're in a maze. The slabs are of varying sizes and when you walk inside, can feel quite disorientating.


Berlin isn't all about the darker side of European and World history. Berlin is also famed for its nightlife. I have to admit I found Berlin's nightlife a bit confusing to begin with. The city is very quiet and doesn't have what you could call a traditional city centre, there are different neighborhoods. When you go out in the evening you didn't really come across a row of bars or clubs in the way you might do on a UK high-street.

Berlin's bars and clubs all appear to be quite discreet, its as if you have to stumble across them or know exactly where you are going to find a place. What I liked was that when you do find somewhere there are some really nice intimate chilled out bars to discover. Busy enough to create a good atmosphere but not overly crowded to make the experience tiring. a couple of the bars and clubs we went to had a bell you had to ring to get in before being confronted by a curtain. It was like you were being allowed into an exclusive venue that once inside was pretty chilled and very inclusive.

I realised that's what Berlin is all about, nice bars and cool clubs that you need to hunt down or keep your eye out for. There's no need to dress up, nobody seems to care what you look like and this is what I quite liked about Berlin.

It's definitely a cool place to spend a weekend. 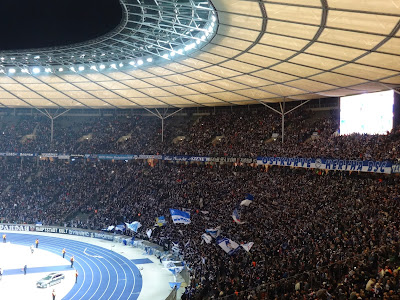 One of the main reasons for visiting Germany was for the chance to watch a Bundersliga football match. The Premier League may be the richest and most popular league in the world, but Germany's Bundersliga has a growing reputation were fans can watch affordable games in some of the best stadiums in the world and where the fan culture and support is second to none.

Watching Hertha v Schalke was a great experience. Hertha aren't really one of the most glamourous or famous names in German football but they're having an exceptional season. Before the start of the match they stood in 3rd place in the league behind Bayern and Dortmund. They have a great chance of qualifiing for next season's Champions League.

This was an important match as Schalke were one place behind them in fourth; if Hertha could win it would help cement their position in third. It was an good match, fairly even in the first half with Hertha taking the lead just before half time. The second half Hertha were very much the better team and deservedly doubled their lead in the middle of the second half. They had chances to make it three which they failed to take but overall they deserved their win.

Apart from the football what really stood out were the fans. Hertha's ultra supporters behind the goal were superb. They never stopped singing and chanting. It was an impressive sight to see thousands of fans all jumping up and down in unison. I should also give credit to Schalke who also brought some numbers with them as well and contributed to the atmosphere. 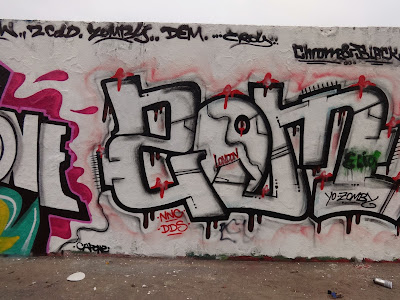 One of the things I loved most about Berlin is the graffiti and street art you see on buildings all over the city. I know you find graffiti in many cities but Berlin seems to have taken it to another level and forms part of the city's look and identity. 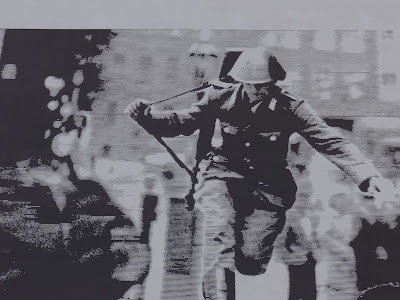 The legacy of the Wall 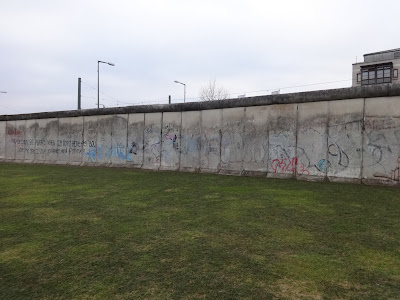 In various districts of the city you can find parts of the Wall that still remain. They form part of a memorial to those people who risked and lost their lives trying to cross from East to West Berlin. It's very poignant to see and it's good that they've kept bits of the Wall up, if only to remind people of the destructive nature of building barriers between people. 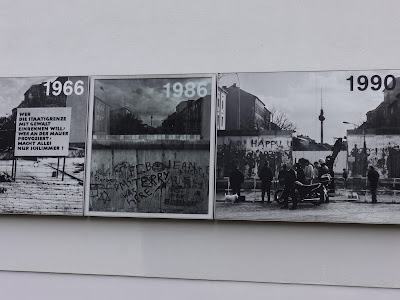