Public Art - What is it for? 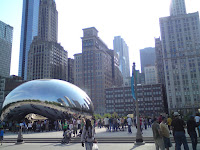 Over the last couple of weeks I’ve been watching a programme on Channel Four called The Big Art Project. It’s a project that the channel has put in place supported by the Arts Council England, which gives members of the public the opportunity to select some form of public art for their local community.

Back in 2005 the channel asked the public to get involved in its Big Art Project. In response to this the channel received over 1400 applications from people who wanted some type of art to be commissioned for a space within their local area.

A selection panel went through all of the applications, travelling around the country, meeting nominators, funders, and local authorities; before eventually deciding on seven sites in the UK which would be put forward for the project. The series which ran throughout May focussed on these seven sites, and how people from each local community worked with curators and artists in deciding what type of art should be created for their particular area.

It’s been an interesting and enjoyable series to watch as it raised the question of what purpose public art actually plays for people. I thought the series highlighted that public art can be something which can help to unite and bring people together, change their feelings and perceptions of themselves and the area that they live in, and work towards regenerating and rebranding communities.

The immediate question that occurred to me, and which was raised during the series was this; How do you get people to join together to produce a form of public art when art can be such a personal, subjective, and controversial subject for so many people?

I really admired the way that many of the people featured were really passionate about what sort of art they wanted within their local area, and what that art should represent and say about the community and the people in it.

Sometimes I think modern art can be perceived by the public as being something that is remote and distant to the lives of ordinary people. You have elements of the art world who at times can patronise the public in regards to their tastes, assuming that many people don’t really know or understand what good cutting edge art is all about.

What I loved about this series was that it showed how the public and artists could work together to produce a piece of public art, whereby on the one hand you have the artists and curators who have their own expert knowledge, skills, and experience of the art world, working alongside the public who have this desire to create something which represents themselves and the area in which they live, and isn't something which is just imposed upon them by artworld outsiders.

By coincidence one programme looked at other examples of public art in cities around the world, one of which was Chicago which I happened to visit during the series.

In Chicago they have a park called Millennim Park which was opened in 2004. The park was designed to be more than just a public space, but for somewhere where sculpture, design and architecture could be promoted and celebrated. The idea of the park was first conceived in 1997 as a way to create a new parkland within the bigger Grant Park and transform what was previously an area of unsightly railroad tracks and parking lots.

The park is now one of most popular and biggest tourist attractions for visitors to the city. The most prominent features within the park incldue the Jay Pritzker Pavillion designed by Frank Gehry which holds a number of outdoor concerts and events, and then probably most peoples favourite attraction the ‘Cloud Gate’ sculpture more commonly referred to as ‘The Bean’ designed by the British artist Anish Kapoor. 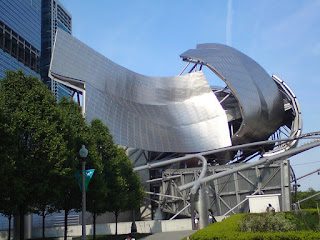 As a piece of public art I thought the Cloud Gate sculpture was superb, not only in its design but in the way in which it acted as a real focal point for the park and for locals and tourists to gather around. 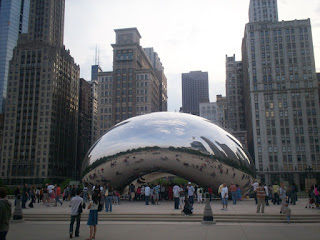 Having done some reading up about the sculpture, I found out that it was supposedly inspired by liquid mecury. That’s not what I immediately thought of when viewing it for the first time, but when you think about it and look at it again, it does make sense and you can see the influence. In explaining his thought process behind the sculpture Kapoor said:

“What I wanted to do in Millennium Park is make something that would engage the Chicago skyline so that one will see the clouds kind of floating in, with those very tall building reflected in the work” 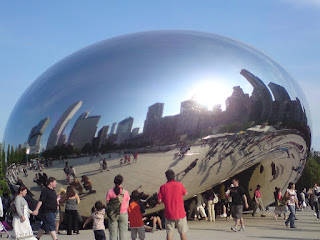 I certainly feel that Kapoor achieved this aim, as the sculpture gives you the opportunity of viewing the city skyline and the city itself in a different way. He’s also designed something which takes into consideration what already previously exists, in the form the city skyline. It’s as if the sculpture is an extension of the city itself and for me this is what good public art should be about, it should show some form of acknowledgment of what already exists within the public space and community in which it is set.

I’m certainly not an expert in public art, but in many ways it helped me identify more with those people featured in Channel Four's series. After I came back from Chicago, I had a greater sense of how art can play a role in peoples lives and change and enhance public areas. I think it's really important that the public do get involved in such projects, and have a say in what is displayed in public areas in the name of public art.

Click on the title heading to view Channel Four’s Big Art Project website and find out more about the seven UK sites chosen for the project and their attempts at producing different forms of public art for their communities.

Posted by RodneyD at Sunday, June 07, 2009
Email ThisBlogThis!Share to TwitterShare to FacebookShare to Pinterest
Labels: Art