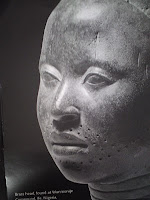 Last Wednesday I took myself down to the British Museum to have a look at a brilliant exhibition on West African Art from the Medieval kingdom of Ife.

The collection presents examples of life size sculptures from Ife in copper, brass, terracotta and stone. But more than that, the exhibition presents African history and African art in a completely different light, that gives you a glimpse into a highly cultured and sophisticated society that flourished 750 years ago.

I'd never heard of Ife before I read about the exhibition a few weeks ago. Ife was a city state which would now be found in modern Nigeria. It first emerged around AD800 and flourished between the 12th and 15th Centuries. 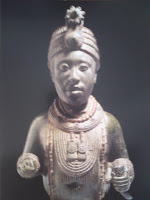 The art from the city was only discovered by the West in 1910, when a German archaeologist Leo Fronbenius spent three weeks in the region collecting objects. Not unsurprisingly, when many of these artefacts were taken back to Europe, nobody could possibly believe that Africans were responsible for creating such sophisticated and beautiful works of art.

Archaeologists first claimed the sculptures must have been the result of some lost tribe of Greeks! A pretty far fetched assumption when you look at the distance between Greece and West Africa. You only have to look at the features on the figures to see that they are quite clearly African and not European. 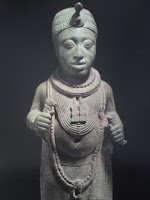 What I loved about the exhibition is that Africa is so often portrayed in a negative light in the West, but here you have an exhibition of art from the continent, that's on a par with anything produced by the Greeks and Romans.

The exhibition also reminded me how much of World history I know absolutely nothing about. I'm a bit of a history geek, and have a history degree, so I like to think I know a bit about most major historical periods. But I was reminded of how Euro centric my knowledge is. This is hardly surprising as I have grown up in the West. 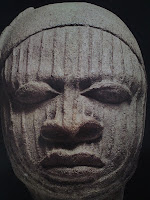 Now if you asked me about major periods in British Medieval history during this same period, I would immediately think about dates like 1066, the Norman Conquest, and William the Conqueror. The Crusades, figures like Richard the Lionheart, the signing of the Magna Carta etc.

Ask me what was happening in Africa during the same period and it's a complete blank to me? This exhibition on Ife tells you that loads of stuff was going on in Africa. Great cultures and civilisations existed, with their own histories, religions, politics and arts. Much of which was way in advance of anything that was taking place in Europe at the same time. 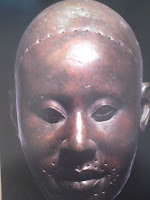 We get a distorted view of African history in the West. Sometimes it's as if Africa doesn't have a history, or the one that does exist begins with Europeans discovering Africa in the 14th and 15th Centuries and exporting slaves to the New World; then later on in the 19th Century, colonising different regions as part of European Imperialism.

Ife was just one small city state, so it makes me wonder how many other 'Ifes' have existed in Africa over the centuries that we in the West know nothing about?

I remember at university, we looked at the philosophical side of history. What is history? What's its purpose? 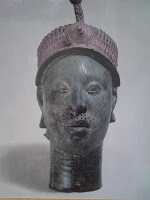 Much of what we call history is in fact a selection process. Historians and societies make choices on what facts and events should be recorded and passed down to future generations. If you think of history as a selection process it means that there are plenty of events and facts that aren't selected and aren't considered 'history' that we no nothing about.

Much of Africa's history is unknown to those of us in the West, but it doesn't mean to say that no history exists, or nothing happened until Europeans arrived. This exhibition on the Kingdom of Ife clearly shows and reminds you of this.

The exhibition started at the beginning of March and runs until 6 June 2010. I'd definitely recommend checking it out if you get the chance.