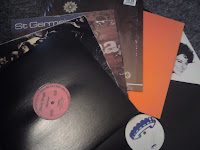 Today is national Record Store Day. You probably haven't heard about it. It's an event that's now in its third year, with the aim of raising awareness and encouraging more people to visit their local independent record shop.

Records shops in this country are now an endangered species, struggling to survive in a musical landscape of downloads and declining physical record sales.

When I hear stories like this, it reminds me how much of my life I've spent in independent record shops buying vinyl and CDs. I hardly do it anymore and I really miss it. I can't say that downloading music has ever given me as much pleasure as buying records from independents.

It's hard to believe now, but at the time I had to visit loads of independent stores and buy vinyl because I couldn't buy those types of music on any other format.

According to statistics, there are now fewer than 300 independent records shops left in the UK. Since 2004 an estimated 540 record shops have gone out of business.

I love my vinyl record collection because I have a deep emotional attachment to those records. I could go through all my records and tell you a little story about each one. Where I bought the record, where I first heard it, the club I was in, the radio show I was listening to.

I have records on vinyl that took my years to track down! St Etienne 'Only Love Can Break Your Heart' The Masters at Work remix. It took my 8 years to track that record down on 12" and even today when I play it, I remember that fact. It means something to me.

There are no stories to tell with downloading, no emotional attachment, no thrill about stumbling across that elusive record you always hoped you'd find.

Of course, downloading is convenient and straight forward. A few clicks of the mouse and you've got an album or single. But there's no effort involved, there's no emotional investment.

I'm sure there are many people, particularly those under the age of 25 who won't understand what I'm talking about. That's fair enough. But for me, being a music fan has always been defined by my record shopping on those Saturday afternoons, just browsing through records, not really knowing what you're looking for or what you might find.

Clearly we're not going to see an increase in the numbers of independent record shops, we can't turn back the tide. But hopefully those records shops that do still exist can be given as much support and help to continue to survive, and hopefully encourage more people to check them out again.

As for myself, I need to start making more of an effort. Get myself down to places like Soho and Camden on a Saturday afternoon for some serious record shopping.

Here's a list of some of the independent records shops that have shaped and influenced my record collection over the last 20 years.

Swordfish record shop - A Brummie institution, a little something for everyone regardless of what you're into.

Tempest Records - Another great record shop in Birmingham, sadly no longer with us.

Selectadisc: Nottingham & London - Still occasionally pop into Selectadisc in Soho, but spent many a Saturday afternoon in the Nottingham store buying everything from House, Hip Hop, Acid Jazz and Drum and Bass.

Funky Monkey - Nottingham: Along with Selectadisc another reason why I made so many afternoon shopping trips to Nottingham. Another favourite that's no longer here.

Blackmarket Records - London: One of the legendary dance music shops in the country. Felt slightly intimidated going in there as a 19 year old new to London, but I eventually gained my confidence and managed to hold my own in there.

Reckless Records - London: Now under a different name but I still pop in when I'm down Soho's Berwick St.

Eastern Bloc Records - Manchester: The first time I ever went to Manchester, this was one place I was definitely paying a visit to.

Amoeba Records – San Francisico: Ok, so it's in San Fransisco and not the UK, but it's still one of the greatest records shops I've ever been to.

Posted by RodneyD at Saturday, April 17, 2010
Email ThisBlogThis!Share to TwitterShare to FacebookShare to Pinterest
Labels: Music