New shopping centre in the City of London

On Friday after work, I stopped off at the new shopping centre that’s opened in the City; it’s called the One New Change.

I read a comment earlier this week saying it represents the ‘feminisation of the City’ as it allows City workers the chance to shop during lunch hours and after work.

The big benefit is that City workers no longer have to trek over to Oxford Street if they want to do some shopping during the week.

This is what I have to do working in the backwater that is Kennington South London. I travel through the City on my journey to and from work, but now I can stop off and do some shopping as well as see some stunning views of the St Paul's cathedral.

We've already got the Westfield centre in Shepards Bush, another Westfield opening in Stratford next year as part of the Olympic regeneration of the area, and Kings Cross has a new shopping complex opening soon as well.

To be honest there's nothing in the One New Change that you wouldn't find anywhere else.

They've got a Banana Republic which has become one of my favourite shops since it opened a store on Regent's Street, and there's also a Superdry store, which is another brand I really like.

But anyone who likes shopping for mainstream brands is going to find something they like in there. 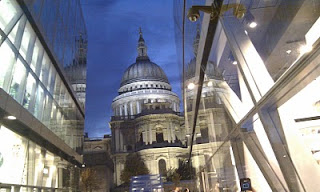 Views of St Paul's Cathedral from inside 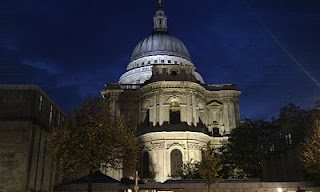 What is quite impressive is the number of different restaurants on one of the floors. The Guardian has reported that the likes of Jamie Oliver and Gordon Ramsey are both opening restaurants.

It means that it's not just a shopping complex, but somewhere where you could have an evening out as well.

On the local BBC London news, they covered this story and although the complex is good news for the City, there were people interviewed who argued that more could be done for some of London's independent retailers, with more support given for existing shopping areas such as Carnaby Street.

It's a valid point; there's a certain homogenisation when it comes to shopping in this country, with the same shops all selling the same thing, but I'm sure the One New Change will prove to be a success as the City hasn't previously had a major shopping outlet like this before.

Posted by RodneyD at Sunday, October 31, 2010
Email ThisBlogThis!Share to TwitterShare to FacebookShare to Pinterest
Labels: Fashion