Anish Kapoor at the Royal Academy of Arts 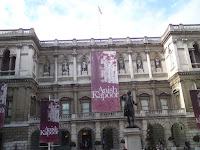 I'm having this week off from work as I have so many days to use up. It's raised the question, what am I going to do with myself? Sit around all day watching crap day-time telly? No!

I decided to get cultural so I took myself off to the Royal Academy of Arts in Piccadilly, to see the new exhibition by the sculptor Anish Kapoor. It was declared exhibition of the week by London’s Time Out magazine which gave it five stars out of five!

It’s only recently that I’ve become acquainted with Kapoor’s work. Earlier in the year I spent a few days in Chicago, where Kapoor has one of his most famous pieces of work in the heart of the city. The giant silver bean sculpture called ‘Cloud Gate’. 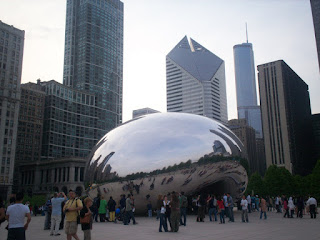 I loved this sculptor so much. It acts as a real focal point of the city in which locals and tourists gather. Following this I read an interview with him in the Sunday Times magazine last month, in which it publicized his exhibition at London’s Royal Academy. The exhibition runs until 11 December 2009 so I decided to check it out. 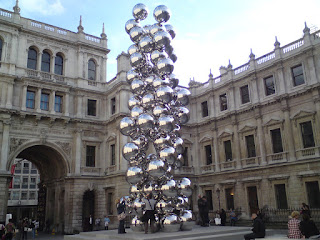 Tall Tree and the Eye - Outside the Royal Academy of Arts

Reading the introduction to his exhibition it was explained how as one of the most influential artists of his generation his work is an:

‘exploration of form and space and his use of colour and material have profoundly influenced the course of contemporary culture.’

The first room which you enter contains his ‘Pigment works’ which are a collection of strange shapes and objects on the floor and the walls which are all covered in red, yellow, and black dye colouring. You look at them desperately wanting to touch them, as if you’re some little kid, but you have to resist the urge.

My favourite piece was the room of 'Mirrored objects'. A collection of objects in which your reflection is continually being distorted and transformed as you walk forwards, backwards, and to the sides of these objects.

At some points it can be quite disorientating as you look at yourself in a mirror, take one step forwards to suddenly find your reflection completely upside down.

In the Sunday Times interview it was said that Kapoor seems to understand our childish delight, this is in reference to the pleasure that people get and the weird feelings of disorientation they feel when they see their own reflections distorted in many of his mirrored sculptures. 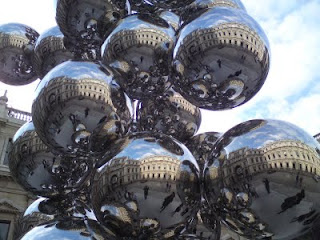 Close up of the Tall Tree and the Eye

I have to agree with this opinion. The whole exhibition is a mixture of art and sculpture mixed in with the feeling of experiencing some sort of fairground amusement attraction. This feeling was increased further when I made my way to the next room.

One of the more unusual things I’ve come across in any art exhibition was the room with a canon firing hot red wax onto a wall. Not something you see everyday. The piece is called ‘Shooting into the Corner', the cannon is fired every 20 minutes, which I didn’t realise when I made my way inside.

I found a huge crowd of people gathered, waiting for the cannon to go off. As the countdown began it certainly produced an increasing amount of tension in the room before the cannon exploded into action.

After I got home I read some more reviews of the exhibition, it was commented that in many ways the exhibits are quite populist, such as the mirrored objects and the shooting cannon.

One word used was sensationalist another was gimmicky! I suppose the idea that these comments are trying to make, is that the pieces all press the right buttons for the public, but is there any real substance behind such works? Are they making the viewer think further on the pieces?

I certainly enjoyed it, and as art is so subjective it all depends on how much you want to take away from what your viewing. Kapoor’s work is quite interactive which is what I like, and which I can imagine makes his work quite appealing. With the mirrored sculptures you’re not just viewing an object but you can become part of the object when you view your own reflection.

It’s only now after getting home and reading more about his work and the ideas behind them that I’ve started to think a bit harder about the themes that his work explores.

Anyway, I’m not an art expert or critic, so I would recommend checking it out for yourself sometime, to see what you think.

Posted by RodneyD at Thursday, October 01, 2009
Email ThisBlogThis!Share to TwitterShare to FacebookShare to Pinterest
Labels: Art