Pop Life at the Tate Modern 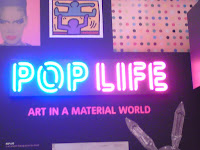 After last week’s visit to the Royal Academy of Arts, I continued my cultural excursions by going to see the exhibition Pop Life at the Tate Modern.

The exhibition looks at the increasing commercialisation of art, in particular the ways in which artists have embraced the world of business and commerce in order to promote themselves and their work as ‘brands’

I thought this was a really interesting idea in which to base an exhibition on, and overall I really liked it; but since it opened last week, it’s attracted a certain level of controversy. There’s a lot of sex, some of it quite explicit and one piece has already been removed. Some of it made me question whether I was looking at art or pornography!

The exhibition is dominated by the work of Andy Warhol, and the exhibition appears to take its inspiration from the quote made by Warhol when he said:

I suppose for purists the idea of art taking on the practices of big business, marketing and advertising goes against everything that art is meant to be about. But having thought about it, why should art be any different to other art forms like music, literature and film?

Before I went to the Tate I wasn’t that familiar with many of the artists whose pieces were on show. Obviously I knew who Warhol was, and he seems to be the founding father of this commercial approach, but since then other artists have come along and taken these ideas and pushed them further.

Of the other artists included in the exhibition, I really liked the recreation of the American artist Keith Haring's Pop Shop. The original shop was opened in Manhattan’s Soho district in 1986 and sold various merchandise like T-shirts, posters, badges and toys all bearing the images of Haring’s work. 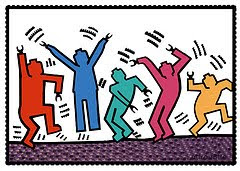 I think this idea of opening up your own shop to sell merchandise, promoting your own work and ‘brand’ style of art, perfectly illustrates this commercial production of art. What I also liked was that besides the cool art work on display, they also played some wicked old skool house and hip hop which made you feel like you were back in 1986!

Another artist featured who has gone on to develop this commercial approach is the Japanese artist Takashi Murakami. He's set up his own factory in New York to mass produce cheap art in various forms, such as sculptures, paintings, books, and videos.

There was a separate room with his work in, dominated by a large tv screen showing a video which featured the actress Kirsten Dunst, playing a Japanese anime character 'majokko' a magical princess.

She wears a blue wig and pink tutu and dances in the streets of Tokyo singing the song ‘Turning Japanese’ by the band the Vapoors.

The more controversial pieces were mainly by the artist Jeff Koons, whose ‘Heaven Project’ was being exhibited in a separate room. A room you can only enter if you're over the age of eighteen.

Another piece I wasn’t convinced by was from the American performance artist Andrea Fraser. There was a room showing a film that she'd made, in which she has sex with a private collector. The collector paid $20,000 for the privilege, in order that he could have the opportunity of producing a form of ‘artwork’ with Fraser.

What's inspired the artist? What are they trying to depict or portray in their work?

For Fraser's film I read that:

‘by offering herself up for sale, she pushes….the viewer’s desire for intimacy with the artist to the logical extreme.’

I'm not sure about that! You can look at it as being, either a form of prostitution on her part; or the collector just acting like some kind of star struck groupie, by sleeping with an artist they admire?

By the time I’d seen everything I did think to myself that Pop Life was a good exhibition. I didn’t like everything, some things seemed provocative for the sake of being provocative, but I’d never really given much thought to the idea of artists representing themselves and their work as brands, commodities, but when you think about it, it seems quite obvious really.

They only thing I’m slightly confused about is whether this commercial approach is about producing great art, or rather about promoting the artist as an individual and a brand. I may have to think about that one another time.

Posted by RodneyD at Wednesday, October 07, 2009
Email ThisBlogThis!Share to TwitterShare to FacebookShare to Pinterest
Labels: Art