I spent most of last week on a four day city break in Boston. I flew out on Monday and returned late Thursday evening.

I liked Boston, but it wasn't quite what I expected.

It's a decent sized place but it doesn't have that big city buzz that I associate with other American cities I've been to like New York or Chicago.

It's got a really chilled out vibe to it, with a pace of life that's more quiet provincial town than bustling big city; but it's a cool place to hang out for a few days. 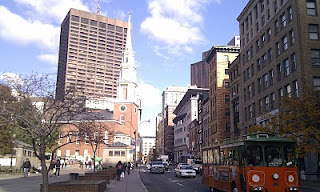 The city itself isn't too big and isn't overwhelming in the way London or New York can appear for some people.

You can cover most of the city in a couple hours of walking. In saying that, I found the central downtown district really difficult to navigate.

Boston doesn't have a grid system to it's roads which makes it more English in that respect.

I frequently found myself in Central Boston struggling to figure out where the hell I was. 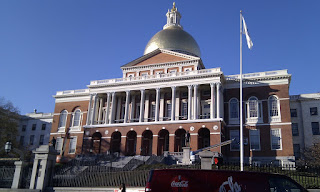 It would literally take a five minute walk, I just had no idea how to get there! It was so frustrating.

The thing about Boston is there's no iconic skyscrapers or other landmarks you can use as reference points to pinpoint exactly where you are.

One thing that did disappoint me about Boston was the shopping. It was rubbish. You've got some very high-end fashion boutiques, and the lower end of the fashion market is covered, but hardly anything inbetween.

A scruffy looking Maceys, an American Apparel, Banana Republic, Abercrombie & Fitch and that was about it, I found it all very annoying.

To be honest there's not a huge amount to see or do in Boston. I think 3 or 4 days is more than enough, but from what I've heard it's a good base in which to explore the rest of New England.

Boston's just got a nice feel to it, it's one of those cities where it's just nice to hang out for a few days.

My two main highlights would be:

I loved walking the streets of Beacon Hill. This Victorian era neighbourhood is the jewel in the crown of the city. 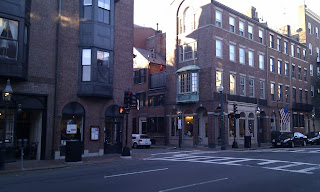 The streets of Beacon Hill

It's got more of an English/European feel about it. Cobbled streets and roads lined with old style Victorian gas lanterns and beautiful terraced houses. 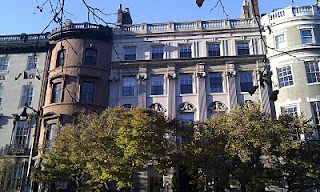 The Village feel of Beacon Hill 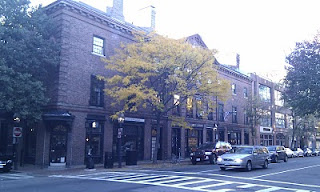 On Wednesday I took a trip to Cambridge. Cambridge is a town in its own right, but essentially it's a suburb of Boston, just a short ride away on the subway.

Cambridge is dominated by Harvard university, the oldest university in America. 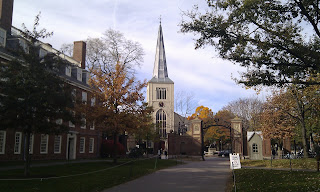 The grounds of Harvard

As I entered the grounds of the university, I noticed a small tour group lead by two students explaining the history of some of the buildings.

I decided to tag along, and one of the tour guides approached me and explained that they take tourists on a guided tour of the university grounds and the town of Cambridge pointing out areas of interest.

It was an enjoyable tour, and the guides were funny and informative, pointing out different Harvard buildings such as lecture halls, student dormitories and churches. 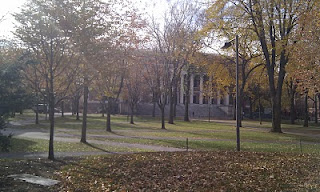 No trip to Boston is complete without a visit to Cambridge, it's a lovely little town with some great pubs, restaurants and loads of history. 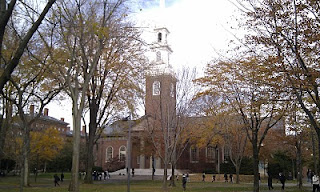 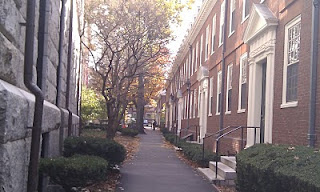