2 years and counting before the Olympics begin!

Two years to go before the start of the London 2012 Olympics.

As someone who lives in Stratford, it's really exciting to watch the Olympic site develop right in front of your eyes. 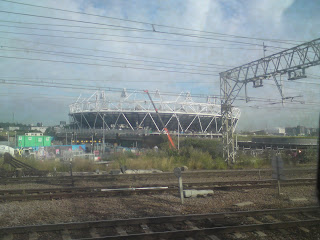 On the Guardian's website they have some excellent photos of the Olympic site. You can have a look at them here.

I also found this video below on Youtube which shows you the inside of the Olympic Stadium.


I can't wait for the Olympics to begin, it will be such an amazing experience. I make no apologies for being very pro Olympics.

You're not going to hear any of the cynical 'It's all a waste time' ...'They'll be too many people in London'...'We should be spending the money on better things' blah blah blah on this blog!

I'm sick of hearing those sort of comments. It's a once in a lifetime opportunity for the country to host the event, and for British people to experience the Games in their own country.

Obviously in these tough economic times with the new Coalition government looking to make budget cuts across government departments, the overall cost and legacy of the Olympics is facing even greater scrutiny.

From what I can gather much of the operating costs of the Olympics are currently ring fenced, and it still looks like the Games will be within the 9.3 billion budget. It's the lasting legacy that seems to be under greater threat from spending cuts.

If cuts are made that undermine the lasting legacy of the Olympic Games, then to me we would have failed in one of the main objectives of staging the Games.

Cuts shouldn't be imposed merely as a PR exercise to appease Olympic critics. If spending cuts are going to seriously impact on creating many of the legacies than this will be a mistake.

It should also be remembered that the Olympics isn't just about a sporting legacy. The five host boroughs including the host London borough of Newham are some of the most deprived areas of Britain. The Olympics must leave a lasting positive legacy on these communities, and if it does this nobody can argue that the cost of the Games hasn't been worth it.

This time next year, I'll be writing my 'One year until the Olympics' post, we'll see how things develop from now.