During the Olympics a number of different countries have set up national hospitality houses all across the city.

It's a chance for countries to showcase and promote themselves and their culture to people living and visiting London. The hospitality houses are holding different events like exhibitions, concerts and parties - many are free to the public.

With this in mind I decided to check out Casa Brasil at Somerset House, the official Brazilian House at the London Olympics. 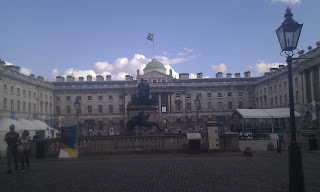 I love Brazilian culture, and as the next Olympics in 2012 will be in Rio, this is a chance for Brazil to start introducing the world to all things Brazilian.

In the main courtyard they've got a stage with singers, musicians and DJ's performing every evening.

I also had a look at an exhibition called, From the Margin to the Edge: Brazilian Art and Design in the 21st Century. It's an exhibition showcasing work created over the last 10 years by a selection of Brazilian artists and designers.

It was interesting as art and design isn't something you immediately associate with Brazil.

I'll be checking out Casa Brasil again as it's open until 8 September.